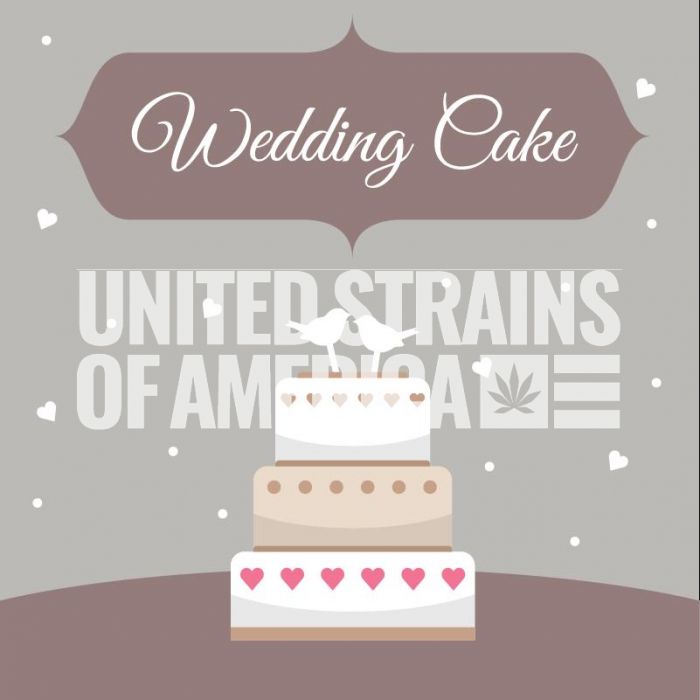 An elusive strain with a premium lineage

Wedding Cake is named for its incredibly pleasant fragrance and delectable flavors. Contrary to the notion that it sounds like a party strain, this is a heavy-hitter capable of delivering a profound body stone.Girl Scout Cookies (GSC) is responsible ... Read More

Wedding Cake is named for its incredibly pleasant fragrance and delectable flavors. Contrary to the notion that it sounds like a party strain, this is a heavy-hitter capable of delivering a profound body stone.

Girl Scout Cookies (GSC) is responsible for many of the traits inherited by Wedding Cake. This award-winning hybrid exudes a sweet and earthy odor while delivering full-bodied relaxation. Moreover, it is highly capable of wiping out pain and inducing the munchies.

The other strain used in creating this progeny is Cherry Pie. Most of its contribution is the physical appearance - particularly the orange and purple coloration - and resistance to molds.

Both GSC and Cherry Pie, incidentally, are descendants of the highly touted strain Durban Poison.

With such a premium lineage that also consists of OG Kush, Wedding Cake has proven itself to be a capable strain. A soaring cerebral high characterizes the onset before the entially couch-locking body high. Not only is it for recreational use, but it also has remarkable properties. These genetics are encased in feminized seeds offered by United Strains of America - the preferred source of high-quality strains.

Although Wedding Cake has been around for a while, it is only recently that seeds were made available. Also, it is a finicky plant and thus entails a higher degree of knowledge and experience to cultivate it to its full ential.

Wedding Cake is a small-to-medium-sized plant that thrives well indoors, outdoors, and greenhouse. Its physical structure tends to be bushy, entailing more work in maintaining. Trimming and pruning are essential to keeping the moisture level within range, thus avoiding molds. Other factors that need regular monitoring are temperature and pH levels.

Popping the feminized seeds supplied by United Strains of America is straightforward. In most cases, the taproot appears after a day. Once the seedlings emerge, it can be moved to a containing organic soil mix. An advantage of this medium is that there is less fluctuation of the pH range. Another is that it helps in developing optimal terpene profile.

As an option, it could also be nurtured in a hydroponic growing system. In this case, feeding the roots with nutrients directly promotes vigorous growth. This is highly beneficial, especially when using powerful HID lamps from the vegetative to the flowering phases.

Wedding Cake adapts well to both the Sea of Green and the Screen of Green training techniques. It is up to individual growers to decide on whether to plant numerous clones or only a few plants. Either way, the expected yield after 8 to 10 weeks of flowering is 450 grams per square meter.

Outdoors, this plant thrives in a location where there is plenty of sunshine. In the northern hemisphere, up to 600 grams of buds per plant could be harvested by mid-October.

Grown from feminized seeds, Wedding Cake is not likely to have any hermaphroditic tendencies. However, it is temperamental, and a slight deviation in any of the environmental factors could affect the quality and yield of harvest. At any rate, after successfully cultivating, expect to get a hold of beautiful, dense, teardrop-shaped buds covered with a thick coating of trichomes. Making for a stunning look are shades of pink, red, and purple colorations.

For a strain that mainly features an earthy aroma with a sweet vanilla note, Wedding Cake is surprisingly enticing. It is also highly palatable with scents that are reminiscent of cakes and cookies - thus justifying its name.

A soaring, euphoric high characterizes the onset of Wedding Cake. Although it can be intense, the cerebral effects in no way come close to a narcotic-like stone. While uplifting the mood, it also promotes mental clarity. Moreover, it also unlocks the creative side, ushering in new thoughts and ideas. During this time, the motivation to be active and engaged is high.

The upbeat demeanor continues even as a warm, sometimes tingly sensation drifts into the body. This Indica property further brightens up the mood. As tensions leave, the sense of happiness swells from within. These effects continue to intensify, causing heaviness to weigh down the limbs. As profound relaxation takes over, the willingness to move dissipates. In moderate doses, laziness sets in. In higher dosage, though, it could indeed induce a heavy couch-lock.

An offshoot of using this strain is the munchies. At the peak of the high, it can make one feel incredibly hungry. Hence, preparing food ahead of time saves one from the hassle of struggling to get up and find food once the full-bodied effects weigh one down.

Among the constituents of its lineage are OG Kush and Durban Poison. Even the two particular strains used to create Wedding Cake - GSC and Cherry Pie - are highly regarded. Such pedigree manifests in the remarkable experience one could expect.

It is useful as a late afternoon or early evening strain for completing final tasks before settling down. More importantly, this strain could also bring relief and comfort to people suffering from mental issues or chronic ailments.

Wedding Cake remains an elusive strain. However, its feminized seeds could be obtained from United Strains of America. Although it entails much more care and attention than usual, the reward is an abundant stash of beautiful buds - some 450-600 grams.