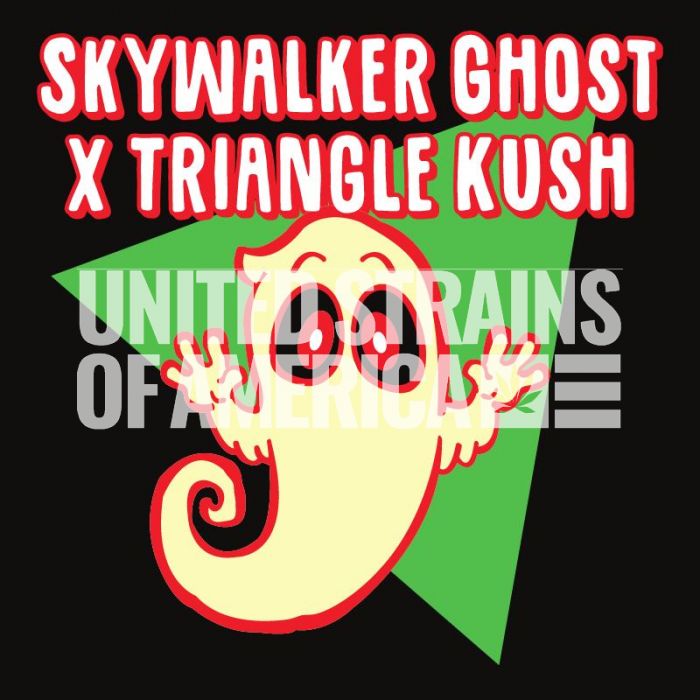 A rare top-quality hybrid, a product of eugenics

The OG family line boasts of several award-winning strains, and Skywalker Ghost x Triangle Kush is yet another addition to the list. This hybrid is a combination of two top-rated OG Kush strains that resulted in a rare, highly sought-after progeny be... Read More

The OG family line boasts of several award-winning strains, and Skywalker Ghost x Triangle Kush is yet another addition to the list. This hybrid is a combination of two top-rated OG Kush strains that resulted in a rare, highly sought-after progeny bearing the best of both worlds.

Skywalker Ghost was hand-picked to be the first parent because of its insane ency, tremendous resin production, exceptional analgesic properties, and tasty citrus zest. Meanwhile, Triangle Kush was chosen because it imparts a euphoric uplift and profound relaxation that makes it an excellent remedy for depression and stress. All these quintessential characteristics were passed on to the offspring, which is why it is so in-demand despite its elusiveness.

However, this hybrid is rarely available in dispensaries. Hence, the only sure-fire way of getting a steady supply is by home cultivation. Fortunately, Grow Your Own offers feminized Skywalker Ghost x Triangle Kush seeds that guarantee ease of cultivation by ensuring an all-female batch 99% of the time.

Skywalker Ghost x Triangle Kush bears Indica-heavy genetics, which is evident in its horticultural characteristics. The plant is compact and bushy with sturdy branches that can uphold the massive colas with ease, even without support mechanisms. Additionally, it is robust enough to withstand mold and pathogen attacks most of the time. However, pruning the thick foliage and maintaining optimal humidity levels are still needed to prevent mold proliferation in the first place.

In controlled environments, this variant thrives in either soil or hydroponics. Cramming no more than 16 plants in a Sea of Green setup is an ingenious way of maximizing space and light penetration while boosting overall productivity levels. When exposed to a 600 or 1000-watt HPS/LED grow lamp for 18-20 hours, each square meter could yield up to 600 grams of massive colas after 8 to 9 weeks of flowering.

If the weather and location are suitable for outdoor cultivation, going alfresco is a far better alternative. It thrives best in temperate or continental areas with plenty of sunlight and produces around 700 grams of resinous buds by late October.

Skywalker Ghost x Triangle Kush exudes a pungent earthy fragrance with a twist of sour, lemon scent. Upon savoring the vapors, a slight beetroot flavor with a bit of lemon zest will tickle the palate, leaving a hint of earthy and spicy sandalwood aftertaste.

Nothing is better than getting a dose of this pick-me-up strain after a busy day of hustling and bustling. Within a few moments of dosing, it imparts a soaring cerebral uplift that enhances mood and creativity. Such mind-clearing effects make everything seem surreal, just like in a dream.

As the high stabilizes, a relaxing sensation will take over the body and compel it to sink in a comfortable position. Starting from the back of the head, down to the spine and limbs, this creping body high also soothes tension and pain. It leaves one feeling light and afloat in clouds of profound bliss and relaxation. After an hour or two, drowsiness will set in before it whisks one away to dreamland.

When consumed in moderation, the side effects are limited to cottonmouth and bloodshot eyes. Overindulgence, however, could trigger bouts of anxiety and paranoia. As such, going low and slow is always the best way to enjoy what this strain has to offer.

Skywalker Ghost x Triangle Kush is a product of eugenics. Breeders hand-picked its parents for the exceptional traits they possess in the hopes that the progeny will inherit it. The result is a resilient hybrid that yields impressive amounts of massive, resinous colas that are not only pretty to look at but are also delightful to relish.

Given its ency and incredible psychoactive and therapeutic effects, it is no wonder that this strain is highly sought-after. With United Strains of America’s feminized Skywalker Ghost x Triangle Kush seeds, harvesting rare, top-quality buds need not be painstakingly hard.