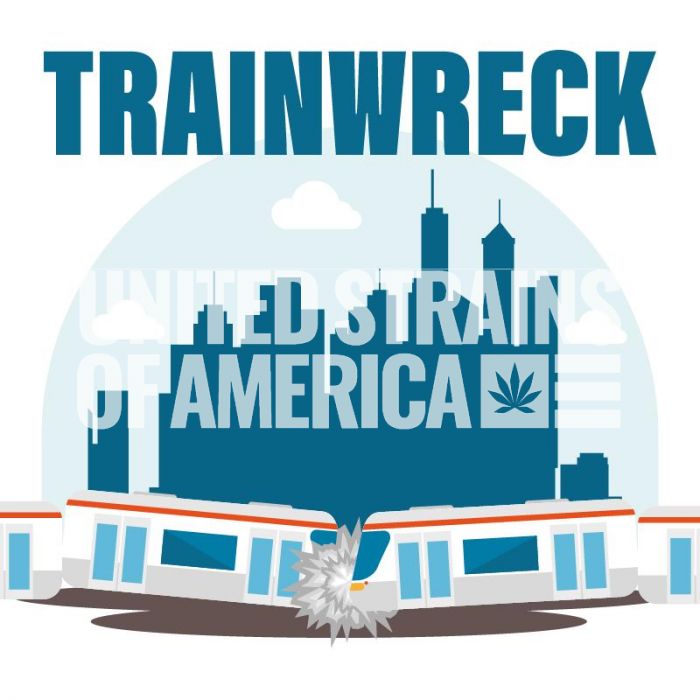 Trainwreck begins with a rapid hurtle of euphoria to the mind. In place of a cup of coffee, it offers a unique brand of stimulation that is both intensely energizing and reinvigorating. Its name is highly suggestive of how the onset slams into t... Read More

Trainwreck begins with a rapid hurtle of euphoria to the mind. In place of a cup of coffee, it offers a unique brand of stimulation that is both intensely energizing and reinvigorating.

Its name is highly suggestive of how the onset slams into the head. Indeed, the strain does contain an insanely high amount of . However, there is more to the name than what it alludes to.

Allegedly, the strain traces its root to a small town called Arcata in northern California. It was the 70s and its existence during those times, to say the least, needed privacy.

An unfortunate accident involving a train derailing caused a swarm of authorities flooding into the scene. It also happened to be extremely close to the house of the original breeders of the strain. For fear of discovery, most of the plants were destroyed, except for a few remarkable strains - one of which was subsequently called Trainwreck.

Much of the effects of the strain is cerebral. And, that is to be expected of a cross between two Sativa plants - Mexican and Thai. A third strain, an Afghani Indica, gave it the ability to complement the mental high with soothing qualities as well as alter its growth traits to be shorter and quicker.

Having a high amount of alpha-pinene terpene distinguishes it from other strains, making it a reliable source for pain management.

For home cultivation, feminized seeds are available from United Strains of America.

Once on the brink of extinction, Trainwreck survived as a clone-only plant before some breeders went to work on producing seeds. United Strains of America carries the feminized form, for instance. Popping it is not at all problematic, and it has a high germination rate. An innately sturdy plant, it requires just enough amount of TLC and experience to have a successful harvest.

The plant boasts of humongous colas that bear dense, pinecone-shaped buds, each one with streaks of fiery pistils scattered like a blaze. And, the thick layer of resin covering the nuggets reeks of ency.

Its wild foliage would need constant trimming and pruning, not just to maintain the size, but also to control the humidity level for optimal distribution of air and light. Trainwreck grown from feminized seeds are more tolerant of stress and is not likely to even have hermaphroditic tendencies.

Using soil or hydro is a matter of preference. Either way, it is best combined with the Sea of Green. After a flowering period of 8 to 10 weeks, a yield of up to 700 grams per square meter could be expected.

In locations with constant sunshine and pleasant all-around conditions, Trainwreck can grow comfortably well. Having access to plenty of sunlight helps in the vigorous growth that results in the production of up to 800 grams per plant. The harvest should be around the first week of November.

This strain’s scent can be likened to a basket of well-ripened fruits. Its pungent lemony aroma with sweet and tangy notes lingers on for quite some time. Pleasurable for the senses, it is also a delight to the palate. Its rich smoke exudes of the citrusy taste with a hint of pine and leaves a peppery, spicy aftertaste.

Trainwreck comes rushing in with an unstoppable force to energize the mind and the body. The psychedelic high leans more on the narcotic instead of focused. However, it is not at all overbearing. Most people have heightened senses with creative thoughts popping into the mind.

It is an ideal choice for social gatherings as it acts as a contagious, social lubricant, one that leads to bouts of uncontrollable laughter. Moreover, it is a fun way to get lost in ‘colorful’ conversation with friends.

After a couple of hours, the cerebral elation slowly shifts into a calm bliss, wrapping the body in a blanket that is relaxing beyond measure.

It is an incredibly ent strain that can be overbearing. For sure, it is not a one for beginners. At any rate, using it is guaranteed to induce a degree of dry eyes and cottonmouth. It can also cause moments of dizziness. For some people too, exceeding the individual limit by even a small fraction could cause anxiety or paranoia.

Trainwreck quickly elevates the mind to a higher state of euphoria before tapering off into a tranquil state. Intensely tropical and earthy in scent, it sets the tone for a delightful journey once the effects kick into the mind and the body.

It is available in some select dispensaries as flowers. And, for home cultivation, Trainwreck feminized seeds can be obtained from United Strains of America. These beans have a high success rate in popping and producing high-grade plants.